In 2006, Pluto was demoted to the status of dwarf planet.

Pluto was discovered on February 18, 1930 by Clyde Tombaugh.  However, decades earlier, Percival Lowell first thought that there may be another planet by Neptune and Uranus.  He died before he could find the planet and it wasn’t until years later that the search was set up again to find the planet.  The name Pluto was decided by an 11 year old girl because Pluto is the Roman god of the Underworld (and Pluto has bad surface conditions like the Underworld) and the first two letters are the initials of Percival Lowell.

In 2006, the International Astronomical Union voted to demote Pluto and have only 8 planets in our solar system.  In the decision, Pluto is now a dwarf planet, not one of the “normal” planets that we are familiar with.

Even though Pluto may be considered a dwarf planet, it is still important and interesting to study!  Because it is so far away, we are not sure of its composition.  We think that, based on its density, that it is 70% rock and 30% ice.  We don’t know what the darker parts of Pluto’s surface are made of; it is possible that it is made up of stuff left over from the formation of the universe or products of photochemical reactions. 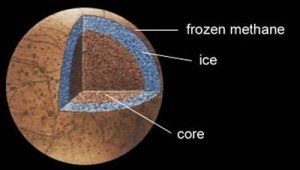 This is a possible image of the interior of Pluto.

Pluto may be small, but it is certainly not forgotten as there is so much left to learn about it!

1 thought on “Our Most Famous Dwarf Planet”